Are 2 Mufflers Louder Than 1? Impact Of Muffler Count & Size 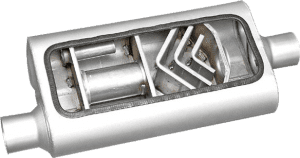 The greatest misconception about mufflers is that the bigger the muffler on a vehicle, the louder the sound. It is not true and is the other way around. The muffler serves as a means to purify the gases from the engine while also silencing the sound created by the exhaust system. Its size plays a vital role in this process.

The muffler functions by slowing down the gases passing through the exhaust system to be disposed of. It can cleanse the gases and reduce the sound of the rushing gases. The bigger the exhaust muffler, the better it can perform this function. With its larger diameter, the muffler can collect more gases and cool down the pressure.

Smaller mufflers, in contrast, do not have the space to reduce the pressure from the exhaust system. The muffler will quickly release this pressure creating a louder sound when compared to the bigger ones.

It would be best to note that getting a muffler that is too big for your vehicle could be bad for your engine. When the muffler is too big, it will create turbulence, and a lower amount of gases will be disposed of.

Is a Longer Muffler Quieter?

A longer and bigger muffler is quieter when compared to the shorter ones. Longer mufflers create more room for exhaust gases to accumulate and cancel the noise effect before being disposed of.

Longer Mufflers give your vehicle a better chance of reducing its exhaust noise. What longer exhaust does is that it has a larger room to collect exhaust gases. So, as more gases are going into the muffler, new gases combine with old ones creating a noise-cancelling effect. The old gases can slow down the pressure of the new gases before being let out of the exhaust system.

Are 2 Mufflers Louder (Or Quieter) Than 1? 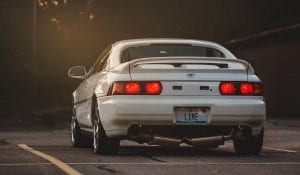 Having 2 mufflers comes with many advantages and can be considered better, but they are not louder than having one muffler. If you want to add better power, you should go for two mufflers.

Although, the sound you will be getting from the muffler depends on the volume, CFM airflow and gas pressure. All these factors can be influenced by the muffler’s size, length and shape, not the number of mufflers.

Is a Bigger or Smaller Muffler Better?

The size of the muffler depends on what you want for your vehicle. If you want a quieter engine, you should go for bigger mufflers. The smaller mufflers, on the other hand, are louder.

The bigger and smaller mufflers have their specific advantage, which some people will enjoy while others might not. For instance, if you are looking for better airflow for the engine, you should go for a bigger muffler, but you will not get a louder exhaust sound.

If you want a louder exhaust sound, you should go for a smaller muffler. It will not be able to slow the pressure in and out of the exhaust system. The pressure of the gases when coming out of their exhaust gives you that sound you want.

However, if you want better airflow and increased power but still want that amazing sound, you can combine your smaller muffler with bigger exhaust pipes.  It is important that you buy a suitable muffler for your car. A muffler too big or too small can be dangerous to your engine.

Also Read: Why Did My Exhaust Get Quieter?

Q: Why Do Cars Have Two Mufflers?

Some cars use two mufflers to increase the airflow of their engine and exhaust system. Two exhaust systems can help dispose of exhaust gases faster than just one. When the mufflers can increase airflow, the engine will perform better, and there will be an increase in horsepower.

Q: What Is the Difference Between a Muffler and a Silencer?

Q: How Can I Make My Muffler Louder?