Blow off valve is a device that releases the boost pressure accumulated in the intake pipe and intercooler when the throttle flap is closed. It prevents the boost from going back into the turbo and prevents the damage to the intercooler or to turbo fins.

Wastegate is a bypass opening that allows the exhaust gasses to pass into the downpipe without entering into the turbo. It may be built in a wastegate or an external wastegate.

Both the blowoff valve and the wastegate are necessary for the health of the whole turbine system. Most OEM turbo systems are equipped with the wastegate system that is usually built in the turbo housing and it prevents the excessive boost in the intake system and keeps the turbo system healthy. While using aftermarket turbo kits you may need to install both systems depending on the setup you have and how much boost you are running.

Here is a quick analysis of both devices:-

Function of Blow Off Valve

This process saves the intake system and intercooler from damage. If this pressure remains, it back flows from the turbo and causes the turbo to slow down to produce turbo flutter. This decreases the lifespan of the turbo system. To prevent this situation, blow off valve is installed that releases the pressure either in the atmosphere or into the circulation for further use. 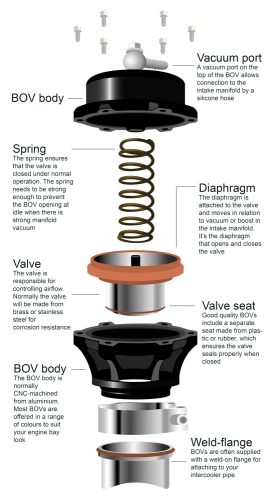 There are 2 types of blowoff valves:-

When fully open in the atmosphere then there is no boost left in the intake system and turbo creates the boost from zero when the throttle flat opens again.

When partially open in the environment the other partial boost comes into the turbine intake through a pipe from the blow off valve. This prevents turbo lag and the power loss is minimum.

When there is vacuum in the intake manifold due to closing of the throttle the wastegate opens and bypasses the gasses into the exhaust pipe causing the turbo to slow down and lowering boost in the intake system.

Wastegate can be built-in or external. Most OEM turbos come with built-in wastegates. The disadvantage of a built in wastegate is that you cannot open and close according to your choice. External wastegates on the other hand can be adjusted accordingly.

Horsepower increase with blow off valve

Blow off valve does not add any horsepower to the engine. The main purpose of the blow off valve is to prevent the turbo system from the damage that can happen due to the boost. 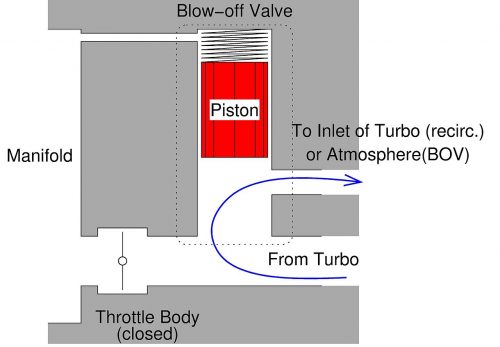 The blow off valve does not aid the system in gaining horsepower. But it may cause horsepower losses depending on the setup. If you are running the setup on high boost and you have set your blow off valve in such a way that it dumps the extra boost into the atmosphere then definitely you are going to lose power. The phenomena behind this is simple. If you are not holding enough boost in the intake system and release it all in the atmosphere when the throttle is closed and then as you open throttle again then you feel no response from the engine because of no boost in the intake system. At that time the turbo is building boost from the zero and you feel no power in the engine. This process is called turbo lag.

This power loss can be prevented by some modern blow off valves. In these valves there are two types of settings. You can either release the boost completely into the atmosphere or partially. The partial air can be again pushed into the turbine intake through a pipe. This prevents the turbo lag as there is already air in the system and turbo has to work less to generate boost again. It also prevents the system from damaging as partial boost is released and the pressure on the pipes and turbo decreases.

Further talking about performance cars, if it’s a drift-built then you should not use a blow off valve because when dirfting, the car will need instant power and you cannot bear any turbo lag. So, the boost must be available every time you open the throttle.

RELATED ARTICLE: Does Supercharger Need Blow Off Valves? ( Vs. Wastegates)

Wastegate does not add horsepower into the system either. But the power losses in case of wastegate are less as compared to the blow off valve.

Wastegate bypasses the exhaust gasses into the exhaust pipe causing the turbo to slow down when the throttle is closed. This prevents the turbo from creating the excessive boost and the intake system retains the boost that is already created if you don’t have a blow off valve.

This system also prevents the horsepower loss as remaining boost is still in the intake system and ready to generate instant power. Most turbo charged vehicles come with OEM built-in     wastegates inside the turbo housing and these are limited to open and close at a certain level.

So, if you are using an aftermarket turbo system you need to install an external wastegate as it has more advanced features like opening and closing at higher rates and more flow of exhaust gasses.

Sound of blow off valve

The loudness of the sound depends on the limit of the opening and closing of the valve and also on the boost level inside the intake system.

If the system opens completely in the environment the sound is loud and happens every time you close your throttle. If the throttle opens partially the loudness is not that much.

If the boost is high in the intake, then the sound is very loud and also it remains for a larger duration. This sound also depends on the size of the blow off valve.

So, you can either have the turbo flutter or the blow off whoosh at a time but not both together.

Most of the time people prefer the turbo flutter sound over the whoosh sound but they are fully aware of the damages that may happen to the system.

Wastegates do not produce any kind of sound as these are not in contact with the direct environment or holding the high-pressure air.

The second reason the wastegate is quiet, it is not holding the pressurized gasses, as the exhaust gasses are already flowing through the turbo and are not that much pressurized and also only a partial of them pass through the wastegate, not all of them like blow off valve. That’s why it produces no sound.

Maintenance of the blow off valve

Maintenance of the blow off valve is required after every 6 months. If you live in a dusty environment then maybe, you need it earlier than the recommended time period.

Blow off valve has a piston in it that holds the boost. If the piston is jammed or dusty it may not open or close completely that affects its performance and causes damage to the turbo system.

Depending on the environment in which you drive this period may vary accordingly. If you do off roading regularly then you must check the blow off valve regularly. Its opening and closing must be proper and it should not be jammed.

Check out this Adjustable Blow Off Valves from Amazon, it does its job and does not set off any check engine lights. It has an adjustable top on it for different types of boost pressures. It’s minor, but you can still tell the difference.

RELATED ARTICLE: Blow Off Valves On Non-turbos & Automatic: Does It Work?

Maintenance of the wastegate

However, there are certain precautions that need to be checked to prevent the turbos from over revving or any other damages. If you hear any flutter sound from the wastegate then you may need to change it immediately. As the spring may be faulty and it will cause power losses.

You need to check for corrosion or any other damages to the valve as it can happen due to oxidation of the metal because it is exposed to the high temperature gasses.

Other than that, there is no specific maintenance required for the wastegates.

The application and need for both these systems may vary depending on the requirements you are going to get from the engine.

If the top priority is performance over reliability, then you can just ignore these systems as you may get power losses by installing a blow off valve or wastegate in your vehicle. But if you want a good healthy system and bear few power losses then this system is the only solution for your vehicle.