A charged pipe redirects exhaust gasses from the engine, passing through the turbocharger. Once this is achieved, the engine can achieve elevated power and torque.

The charge pipe is a pipe that is majorly made from either stainless steel, rubber, or aluminum material. It is mandrel-bent to allow better manipulation of exhaust gasses. The charge pipe is connected to the intercooler system.

There are two major categories of charged pipe: the OEM and aftermarket or upgraded charge pipe. The OEM-charged pipe can be great but can be fragile. It is because they are made from plastic material. However, the upgraded or aftermarket charge pipes are more durable and deliver more gasses to the turbocharger.

Also, charge pipes are bent in nature, unlike downpipes, which are straight. The charge pipe bent nature helps to route gasses from the engine system to the turbo system, which helps to power the turbine.

The more gasses the charge pipe can direct to the engine system, the higher the turbocharged engine can reach maximum performance, creating the power your sole desire your engine to have.

Personally, I have tried the charge pipe on my turbocharged Honda Civic engine. I got an aftermarket charge pipe to replace the original pipes installed on my engine.

The large pipe had more diameter, which was what I needed. After the installation, I noticed that I got a faster boost and improved my engine performance.

Does a Charge Pipe Require a Tune?

Most charge pipes do not require tuning because they are made to fit and have been tested to work perfectly with recommended vehicles. All you need to do is buy the recommended charge pipe for your turbo system, and you are good to go.

Tuning a charge pipe depends on what brand of charge pipe you get. Most stock charge pipes do not require tuning; they are made to fit perfectly the vehicle parts that will be installed. I would not be able to say the same with aftermarket products.

Although many aftermarket products are built to fit and perform well with some particular brands of cars, there is no guarantee that they would work well with yours. Tuning the aftermarket charge pipe before installing it into your vehicle may be required for some specific vehicles.

It is important to take note of charge pipes that are specifically built to work well with your vehicle before going ahead to buy one.

Also Read: How Much HP Can You Gain From a Dyno Tune?

You can gain up to 10 to 20 horsepower with a charge pipe. You can also gain higher power if you get a charge pipe with a bigger diameter.

The charge pipe is preferable to its counterparts because it produces more horsepower and is durable. The modification is made to improve the airflow in the exhaust system, allowing air to move freely in and out of the engine system.

Also, the charge pipe can eliminate many factors that cause restriction of airflow in the exhaust system and the engine. However, it is bent, and it does not serve as a restriction to airflow to the turbo system. Its bent nature allows the pipe to carry a large amount of exhaust from the engine system to the turbo.

Does a Charge Pipe Void Warranty?

The only way your vehicle brand may void the warranty is if a connection can be established between the damaged engine or car part and the installed charged pipe.

It is also good to know that many vehicles’ warranties may vary, which may not apply to your type brand of engine. You can read the warranty policy for your vehicle brand.

To avoid any damage to your vehicle that may arise as a result of the installation of the charge pipe, you should give a professional. It may cost you more, but I would be the best.

How Much Does a Charge Pipe Cost?

Charge pipe can cost from about $150 to $500.  The cost of a charge pipe depends on many factors, including the brand, the engine type, and the diameter of the charge.

Charge pipe prices can be influenced by many factors, some of which can make it even more expensive. One major factor affecting the price of charge pipes is the material used in making the parts.

Charge pipes made with plastic or rubber are the cheapest types of charge pipes on the market. They are mainly found on OEM charge pipes and a less durable than others.

The N55 pipes are rather cheaper and more durable than the OEM ones. The OEM N55 products can cost up to $350, while the aftermarket charge pipe costs about $250. 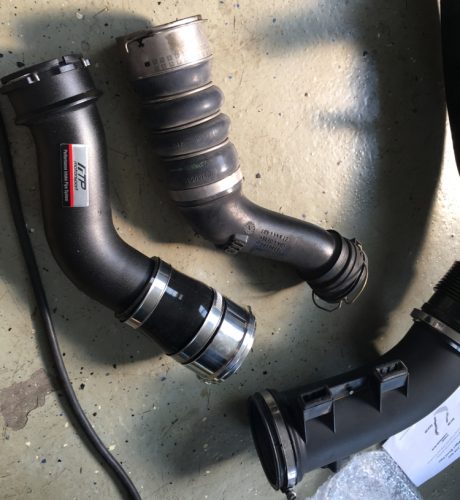 Charge pipe is legal because it does not increase emission.

Charge pipes are legal in all United States and most states worldwide. The modification is legal because it does not affect emissions and also does not make your engine too loud.

Charge pipes are very much legal to use and you will not have any problem with the authorities when installing them. Though the charge pipes redirect exhaust gases to the turbo system, it does not modify or affect the exhaust system.

The gases are redirected from the engine system itself. That is, once the engine burns fuel and creates exhaust gases, the charge pipe collects these gases before it goes down to the exhaust system.

Charge pipe does not make your car’s engine too loud when installed. When installing the charge pipe, you will hear an improved sound from the turbocharged engine, which in most cases sounds exotic.

However, you can expect an improved performance from your turbocharged engine. It is because more and better charged or exhaust gases can now find their way to the turbo system. If you notice a change in the sound of your engine after the charge pipe has been installed, it could be due to a leaking boost.

Also Read: Turbo & ECU Tuning: Can You Turbocharge Without Tuning?

Q: What Does the Charge Pipe Do on a Diesel?

Q: What Does BMW Charge Pipe Do?

Q: What Does WRX Charge Pipe Do?

The WRX charge pipe is a special charge pipe made for the Subaru WRX turbocharged engine. It is made to be very durable and could come with a diameter of up to 2″ to 2.5″. Unlike other OEM charge pipes, the charged pipe will allow more exhaust gas to enter the turbo engine.

Q: Do I Need to Upgrade Charge Pipe?

Q: Does a Charge Pipe Connect To The Intercooler?