Can Your Exhaust Backfire With a CAT? Tips and FAQs

Personally, I have experienced a backfire with my vehicle due to a bad catalytic converter. It came with noise in the engine and bad gas mileage.

When the catalytic converter gets bad, fuel residue not burnt in the engine combustion system could escape the exhaust pipes. When enough is built up in the pipes, with the right amount of heat, the fuel can get ignited and cause a backfire.

Holes in the catalytic converter may allow excess air into the combustion chamber. Situations like this could affect the ratio of air and fuel mixture. Once this happens, it will allow more unburnt fuel from the engine into the exhaust system. 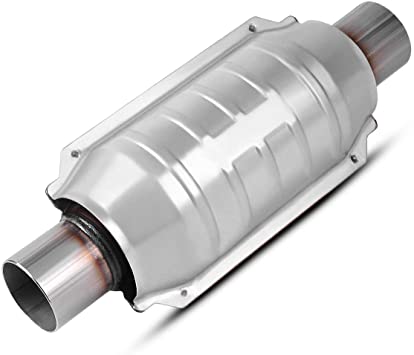 Broken CAT can cause backfire because of carbon buildup.

Will a Catalytic Converter Delete Cause Backfire?

Deleting your catalytic converter will cause your engine to backfire. The primary cause is that the exhaust gases will not be adequately cleaned, causing fuel to escape to the exhaust pipe. Also, the o2 sensors will be affected, causing an imbalance in the mixture of fuel-air ratio.

The reason people go on to remove the catalytic converter is to increase their engine’s performance. In the real sense, it does increase the engine performance by removing backpressure and increasing the airflow.

Can You Shoot Flames With Catted Downpipe? (Do You Have To Be Catless)

If you want to shoot flames, then you have to go catless. Catless downpipe will better shoot flames, resulting from the non-restriction caused by the absence of the catalytic converter. Once the restriction is out, fuel can get into the pipes and get heated up.

A catless down pipe will eliminate the catalytic converter and give the exhaust gases a less restrictive passage. It means that there will be no conversion of the gases to remove any foreign addition that may be dangerous to the environment, including fuel residue.

The fuel residue will build up in the exhaust pipes quickly, and your exhaust will be shooting flames with the right amount of hit. You must know that catless downpipes are illegal in many states in the United States, and having a catalytic converter is essential to pass emissions.

Will a Clogged Cat Cause a Backfire? 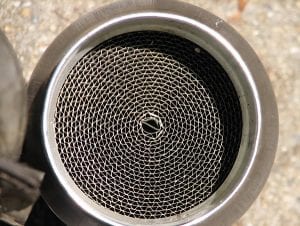 Clogged catalytic converter can cause backfire because it cannot clean the exhaust gasses as well.

A clogged cat can cause a backfire in your exhaust; once there is a clog, then the catalytic converter may not be able to clean the exhaust gases as it should.

Many factors could make a clogged catalytic converter cause a backfire. One is that the cat’s clog could affect the fuel and ratio in the engine combustion system. It will make the engine consume more fuel than air, causing more fuel residue to escape into the exhaust pipe.

Also, the clogged cat will affect the way the cat can filter the exhaust gases of fuel residue. Once this happens, expect more fuel in the exhaust pipes and backfire.

How Can I Make My Car Backfire? (Tips For Loud Backfire) 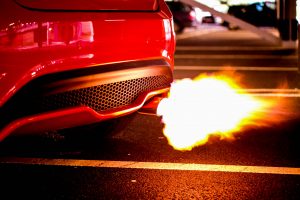 ECU tuning and going catless is a great way to cause backfire.

There are many ways you can make your car backfire. Some may require that you change your car’s exhaust system, while others may require some simple tricks.

Some exhaust upgrades, like a catless downpipe, can backfire on your engine. The problem with these upgrades is that they attract a lot of attention from the authorities and can get you into trouble.

Suppose you do not want to pass through the trouble of changing your exhaust system. In that case, you can consider tuning your Electronic Control Unit (ECU) if you have good knowledge, and it will require you to rewrite the code of the ECU and make significant changes to the fuel-air mixture, timing, and so on.

You can also hit a higher RPM to trigger a backfire, which will happen when you shift to a higher rev too soon. In conditions like this, you will cause a rev spike. However, if you are driving a manual car, this could either be harder to do or even not applicable at all. It is because you are not in control of the shift.

Q: Can a Backfire Damage an Engine?