Exhaust leaks are a severe issue for the environment and your vehicle due to the dangerous gasses released into the environment. A leaking exhaust could also lead you to be in trouble with the authorities.

The exhaust system of your vehicle is designed in such a way as to reduce the level of toxic waste that your car releases into the environment. Issues like a hole in the system will allow toxic fumes into the cabin system rather than going out of the vehicle.

These fumes contain dangerous substances, such as carbon monoxide, phosphorus, and nitrogen oxide. Fumes like this could cause serious health issues to passengers in the vehicle and people around that inhale them. Accompanied by the dangerous gases released into the environment and vehicle, an exhaust leak also causes serious problems to your vehicle’s performance. Your car will experience reduced power in your engine’s system.

Although it is unclear whether you could be pulled over for a leaking exhaust system, a person is guilty of an offense when he uses or permits a person to use a vehicle that could harm another person. It means that you stand a chance of getting pulled over because your vehicle emits gases that are dangerous to other people.

Personally, I have experienced a leaking exhaust system. It happened with my exhaust pipes and came with a lot of noise and a gas-like smell, which I could still smell though my windows were closed. I was able to fix the problem with a bit of welding work.

What Happens if My Exhaust Is Leaking?

During an exhaust leak, you could face unbalanced air-to-fuel ratio, increased vehicle noise, air pollution, etc.  Below is a list of possible things that may happen when your vehicle has a leaking exhaust. 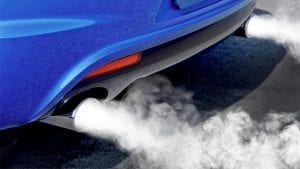 Exhaust leak could be dangerous to you and your surrounding.

Your engine will also experience an increased noise which could be embarrassing and attract the police. Exhaust leaks in a more internal location close to the engine system could cause even louder noise when accelerating. The noise you can expect from a leaking exhaust system depends on the size, shape, and location.

With an exhaust leak, you will definitely fail inspection.

Your vehicle will fail an MOT test, and this is because of many factors, including the emission and noise coming from the engine.

Can I Still Drive With an Exhaust Leak? (For How Long?)

It is not advisable to drive a vehicle with an exhaust leak. The dangerous gases could get into the vehicle and contaminate the air, making it dangerous to the driver and passenger. If you drive for a long time under this condition, you and the passengers could get ill. It could also escalate the health condition of people with underlying health issues.

Furthermore, when you realize the leak in your exhaust system, it is best to get the problem fixed immediately. It would be best if you did not waste any time; apart from the health issues it could cause, you also stand a good chance of getting pulled over by the police. Remember that your vehicle cannot pass an emission test with this problem.

How To Fix Exhaust Leak? 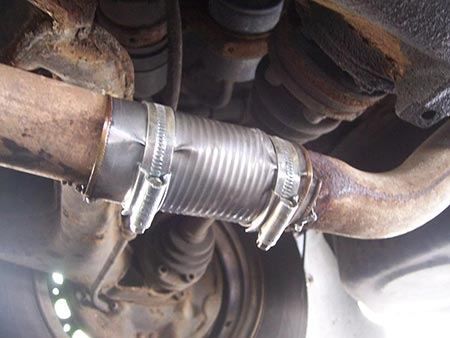 To fix exhaust leak, you need to cover up the leak – usually by welding or clamps.

Fixing an exhaust leak depends on where and what type of leak you have. Some exhaust leaks may require that you replace the part, while some may need welding.

To fix an exhaust leak, you must first find where the exhaust leak is coming from. There are many parts of the exhaust system where a leak can happen, including the following.

You can also get the leak by listening for unusual sounds from the system, like a sharp ticking or knocking sound. If the sound is coming from the lower part of the exhaust, then it could be from the pipe or catalytic converter.

After examining a leak, if it comes from the manifold, it could result from a failed gasket. It would be best if you changed the gasket. Some leaks from the catalytic converter and muffler may also require replacement. Trying to fix parts like this could cause contamination to the exhaust system, so it is best to replace them.

In addition, you can fix an exhaust leaking problem by getting good welding work done on the leaking part. The welding work will permanently seal the leaks, and you can also get your tailpipe back into position using this method. If you are looking for a temporary repair, you could use tapes and epoxy bonds. A repair like this will buy you more time but not fix the problem.

Cost To Fix an Exhaust Leak

Getting your exhaust system fixed could cost between $80 to $400. The repair cost depends on many factors, including the damage done to the exhaust system and whether it will require a replacement or just a fix.

Fixing a leaking exhaust could be tricky, especially when determining where the leak is coming from. Doing this will require a lot of attention and could be time-consuming. After the leak’s location has been determined, the fix could be easy. Some leaks can occur in multiple areas of the exhaust system. This problem can influence the price of the repair. It would help if you did not forget the price of labor which can cost about $100.

Symptoms Of Exhaust Leak: Can You Smell It?

There are many symptoms of exhaust leaks, including increased fuel consumption, reduced engine performance, and fume smell, the most disturbing symptom.

Below are some of the symptoms of a leaking exhaust system.

Q: Can an Exhaust Leak Damage the Engine?

An exhaust leak can damage the engine of your vehicle. Exhaust gases could escape into the engine combustion system and increase the pressure in the engine. If the engine can not handle this pressure, it could cause various parts of the engine to fail, eventually leading to engine failure.

Heat wraps can stop the leak in your engine system. All you need to do is soak in water and place it wherever the leak comes from, then apply heat. Although the heat could serve as a suitable repair, in some cases, it could be a temporary one. Some leaks require the replacement of the affected part.

Q: How Do I Temporarily Fix an Exhaust Leak?

You can temporarily fix a leaking exhaust by using tapes and epoxy bonds. It will buy you a little time before you can fix the leak.