Is Cold Air Intake Worth It? (Money Vs Horsepower & Sound)

Personally, I have tried the cold air intake modification on my old Volkswagen golf and could not notice a considerable increase in horsepower. Here is what I noticed instead! My golf sounded much louder and more challenging, and that’s cool.

That being said, in this article, I’ll be talking about everything you should know about a cold air intake, it is worth it, what is the cost of installation, and other factors like horsepower and sound.

Cold air intake is not worth it for horsepower gain – it will not give your vehicle significant increase in horsepower (5 hp) and if it does it is little.

The horsepower gain is not a major reason you should get the cold air intake. At most, you get 5-10 hp – usually none.

Cold air intake helps in getting more air into the engine’s combustion system – which should make the car produce bigger combustion, resulting in more power.

However, in practice, cold air intake alone won’t improve air flow too much. Thus, the power gain is minimal. If you care about horsepower and air flow, you should look into exhausts or headers.

For horsepower, Cold air intake must be installed together with exhausts or headers. Otherwise, there won’t be much horsepower gain.

When compared with other mods, cold air intake does not stand out in terms of power gain. For example, aftermarket exhausts and headers will provide much more horsepower than a cold air intake.

This is because both exhausts and headers are much larger components and can help improve airflow much more significantly than cold air intake.

Cold air intake is definitely worth it when it comes to sound improvement – especially because it’s much cheaper than other mods like exhausts.

The cold air intake will give your car a much improved sound – specifically the sound of air gushing into your engine as you accelerate.

The cold air intake modification allows airflow better into the engine, which can be heard when you rev up. The modification gives the car a more aggressive and exotic sound, making heads turn when you pass by.

An aftermarket exhaust will give your car an improved sound but differently the cold air intake. An exhaust makes your car sound louder and more aggressive. But for cold air intake, it’s the sound of gushing air. 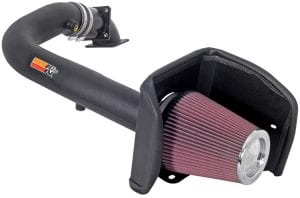 Cold air intakes are not got for horsepower gain but improve your car sound significantly.

The cold air intake is quite cheap to buy and install when compared with other mods. However, this depends on the car model, brand, and quality of the cold air intake. Price starts from $70 – $500.

When compared to other mods, cold air intake is on the cheaper side. For example, it’s common for catback exhausts or headers to start from $700 depending on the car model and brand.

Related article: Cold Air Intake Vs Exhaust (Which One First?)

Cold air intake is easy to install – it does not require an expert. But if you decide to hire a mechanic, it also shouldn’t be that expensive (about $50).

Mods like exhausts and headers are very hard to install and can easily cost hundreds of dollars. You will need to significantly think before getting exhausts or headers. But for cold air intake, that’s not really the case.

If your car is new and still under warranty, then it’s not worth it to install cold air intake because that warranty will void.

Though it’s important to know that not your entire car warranty will void. Instead, only warranty for parts around the cold air intake will be void. For example, the stock intake, air box and even oxygen sensors may be void.

This is similar to other mods like exhausts and headers where the installation will definitely void some parts of your car warranty.

If your car is no longer under warranty, then it’s definitely worth it to install cold air intake.

The cold air intake is definitely a worthy modification because it can significantly improve your car sound and it’s quite cheap to buy and install.

The cold air intake might not be able to improve your vehicle’s performance to your expectation, but it is a great way to improve the general performance without having to spend a lot of money. It provides vehicles with up to 5 horsepower, which is quite good for its price.

Also, if you are a sound person, you would love the cold air intake. The cold air intake gives your vehicle an aggressive sound that is not annoying to the ear. Due to the air going into the engine, you can hear the rush of air as you rev up.

Is Expensive Cold Air Intake Worth it?

Expensive cold air intakes are worth getting if you are looking for a product that will last longer.

When it comes to what makes the cold air intake expensive, it has to do with the material used to make the modification, vehicle performance, and durability. These factors make the expensive COI better than the cheaper ones.

If you are looking to get the best performance for your vehicle, you should go for a cold air intake that costs $200 above.

Also, you should consider the durability when it comes to installing a cold air intake. A more expensive modification will give you about 100,000 miles without a need to clean.

Furthermore, expensive COI are made with unique materials that make them resistant to heat and longer.

Is Cheaper Cold Air Intake Worth it?

Cheaper cold air intake is not worth buying because they won’t last long and can potentially damage your car when significant debris enters into the engine.

Cheaper cold air intake is quicker in getting damaged. They are made from cheaper material, and many get easily damaged from heat. They also require more regular cleaning and maintenance.

Although cheaper cold air intakes can still give you that desired sound improvement, I don’t recommend getting them. I would personally spend the extra $100 – $150 and go for a good cold air intake with peace of mind.

The Best Cold Air Intakes, Their Specifications, And Prices.

The K&N Typhoon series is a cold air intake made for show-off. It has a  spectacular build that keeps you amazed whenever you take your car out for a ride. It is made from an aluminum intake pipe, ensuring that air reaches the engine and tremendously boosts its airflow.

The K&N typhoon series is made in a wide variety, and it is built specifically for sport compact cars. For example, the Honda Civic will be a perfect car to use this modification.

However, it is vital to consider the legality in your state before installing them in your car. The K&N typhoon series costs above $300; it ranges between $300 to $450.

The Airaid MXP series is a premium cold air intake modification. It is explicitly made for high-performance gasoline and diesel cars. This modification gives your car’s engine the additional airflows it needs to perform better, which gives your car a power boost of up to 30hp.

They are made of polyethylene intake pipe built in the velocity stacks for better airflow. It also features a one-piece airbus and a premium air filter.

The Airaid MxP series may also come in a carbon fibre intake pipe that’s designed to look nice and lighter weight. The fibre Airaid MXP is only available for Camaro, Mustang, and Corvette Models. You can also get a separate fibre pipe if you want to change your existing one. 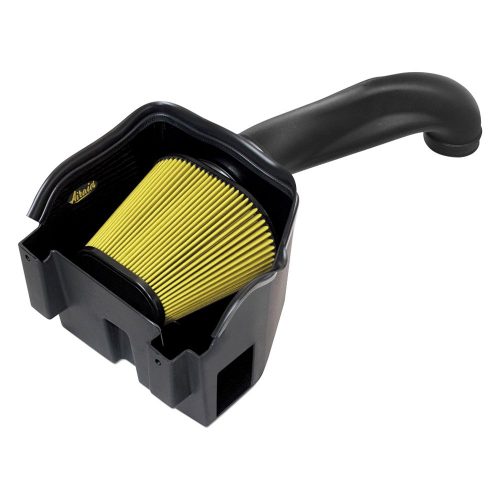 The K&N 63 Series is made in different varieties made for a wide range of cars. The cold air intake has the largest conical air filter, which is wide and is complimented with an intake pipe made of polyethylene. It has a heat shield that modifies and lasts longer.

The large filter acts as a protection from the heat emitted from the engine. It can pull out a larger amount of cold air into the engine when compared to the stock airbox.

The filter has to be cleaned after every 100,000 miles, which will help the filter last longer, and also, you will be able to save up money from having to replace the filter. A new filter will cost about $20 to replace.

Also, the intake pipe and shield are very durable and will be used just as long as the filter.

K&N 63 series is considered one of the best cold air intake that you can get for your vehicle. It costs within the price range of $350 to $400. 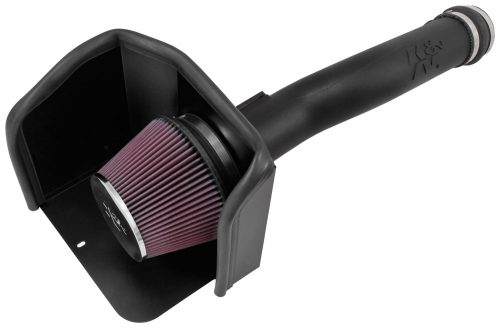