An open header is when your car runs only through the exhaust headers.  This means no exhaust pipe, no catalytic converters and no mufflers. Exhaust gases come out to the open air directly from exhaust headers.

Open headers may increase your horsepower ratings by a big margin – about 30-40 horsepower, depending on the displacement of the engine. Especially if it’s a big block.

Open headers will also make your car extra loud, and you may not be able to talk with your friend that is sitting next to you.

Personally, I ran open headers on numerous cars, just to test them out. I have always been curious about how my cars would sound with open headers.

The first time I did this mod was on my Honda Civic that I got in high school, and it sounded mean. The most recent car I ran on open headers was my 1986 Camaro with a Chevy 350 small block – where I quickly returned it back to stock setup.

In this article, we are going to dive deep into open headers. From basic stuff like what open headers really are, their benefits and the downsides – especially when it comes to the laws.

I will also touch a bit on tuning (in case you are serious about trying out open headers). Ready? Let’s go.

What Are Open Headers?

Open headers is where you run your car without any exhaust pipe, CATs, or mufflers. Exhaust gases exit to the atmosphere directly from the headers.

People run open headers mainly for performance and sound. Open headers are significantly less restrictive than the traditional setup. More about this in the horsepower section.

With bigger engines like V8 or V12, the sound is absolutely aggressive and you could even create flames when hitting the rev limiter. Nothing gets more aggressive than this.

Open headers are aggressive and cool when applied on the right settings – think drag strips where you are running on track. Running open headers on the street will get you in trouble for sure. 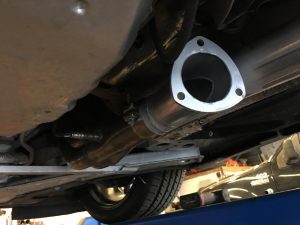 Cars with open headers let exhaust gases out from its headers – no additional piping, mufflers or CATs involved.

Open headers will definitely add horsepower to your engine. This is made possible by the fact that exhaust gasses flow easily and deliver quite a lot more gasses through the pipes at one time.

This enables the engine to draw more air in the combustion chamber and create much bigger combustion for power.

Depending on the headers that you have installed in your car it is possible to add 30-50 more horsepower. The displacement of the engine also plays a big role if this mod will help you out in making some good numbers.

Since you will add more air to the engine you will probably need a better intake. Best thing to install in my opinion is a cold air intake. Then you can get bigger injectors and a stronger fuel pump.

Combining open headers with other mods like cold air intake and tuning can help you gain even more horsepower – think 100 horsepower or more. This, of course, is the best case scenario and depends on many factors like your budget.

Do You Need Tune With Open Headers?

To run open headers properly and gain horsepower, you will definitely need tuning. This is because the air/fuel ratio of your car gets significantly tweaked. And not to mention how other components like O2 sensors will be impacted.

With tuning, you could instruct your car’s computer to inject more fuel and fix the air/fuel ratio. This means on every combustion cycle, your engine will have significantly more air and fuel. Thus, creating more power.

Getting a tune in a local tune shop will be a very easy thing to do. These base tunes do not cost a lot of money and you may pay something from $200 for a basic tune, and up to $500 for a full tune.

If you plan to only test things out and reinstall the exhaust pipe again after a short period of time, then tuning will not be needed.

Open headers will make your car sound much louder due to the fact that it does not have any sound suppression device like mufflers and the combustion is more powerful than before.

With a correct installation of open headers, expect a much louder sound – even five times louder. Louder than muffler delete and straight piping – clearly not suited for daily driving on the street.

It is a good mod for a weekend of fun with friends on the track. Personally, I did it a couple of times and always got a smile on my face.

Here’s a YouTube video showcasing the sound from open headers. Skip to 2:43.

Cars with open headers are not legal to run in public – mainly because of the extremely loud sound and polluted exhaust gases.

If you run open headers in public you will definitely run into trouble with the law.

There’s no way to hide an open header installation. The local traffic officers are guaranteed to spot you and hit you with a fine – one for disturbing the peace and another for the emission.

With open headers, you are also guaranteed to fail any regular emissions test. Make sure to reinstall your exhaust before the emissions test and also before you drive on the street!

Remember, you can only do open headers on the track.

Significantly more oxygen in the combustion chamber can cause your engine to run lean – where it’s prone to overheat and be downright dangerous.

Here’s an article of mine about running rich vs running lean. I wrote it for motorcycles, but in general they also apply to car engines. Is it Better To Run Rich Or Lean On Motorcycles?

If you are running on older carbureted engines, then you don’t need a tune for open headers. What you need instead, is to update the setting on the carburetor and get a correct air/fuel ratio.

Should You Run Open Headers On Your Car?

Running on open headers on the dragstrip will give you a lot of extra power and torque you need in order to grab those numbers on the ¼ mile.

Open headers may improve your time by 1-2 seconds per run, and that is quite a lot if you are asking me. When I ran my Camaro on the dragstrip with open headers, the feel was incomparable compared to when I was running my car with regular mufflers.

We may conclude this article and say that, although running open headers on your car may look and sound cool. It is not recommended if you are running your car on public roads.

If you are planning to use the vehicle on the race track then with this mod the car will benefit by making some extra horsepower. And will increase your times by some good margin.

In my opinion, you should try running your car on open headers, namely just to see and test out some things. And also, because it’s a lot of fun. After that you can return the catalytic converters on and run your car as it should be from the factory.