The primary reason for installing a straight pipe or a downpipe in your vehicle is to improve performance and substantially alter your vehicle’s sound.

Knowing about both of these exhaust systems allows you to select the ideal one for you based on your tastes and preferences. Although a downpipe is costly, it has only minor negative effects on your engine and is also good for the environment.

Let’s go further into this.

What is a Downpipe exhaust system?

Downpipes are tubes that link the exhaust side to the beginning of the vehicle’s exhaust system, enabling wasted exhaust gas to escape the engine. Catalytic converters are also used in downpipes to reduce the emission of dangerous gasses during operation. Because of its proximity to the turbo, the efficiency of a downpipe directly influences turbo spool and performance. In one of my posts, I discussed downpipes in further detail. 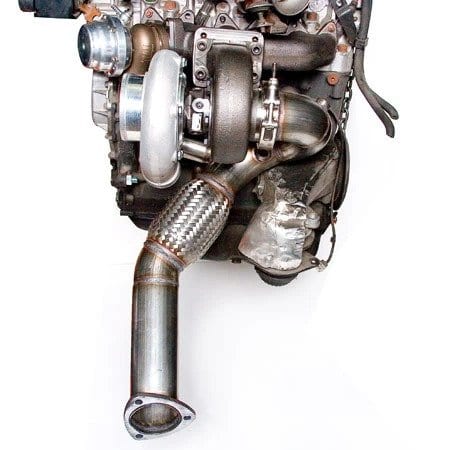 What is a straight pipe exhaust system?

A straight exhaust pipe is one that has no muffler or a catalytic converter. The exhaust gas from combustion is sent straight from the exhaust header to the vehicle’s exterior, with no obstruction. The goal is to eliminate any components that might obstruct exhaust gas flow, enabling it to exit the vehicle as freely and fast as possible.

This implies that more air can now enter the evacuated combustion chamber, providing for better combustion and power. For additional information, see my post on straight pipe exhaust systems. 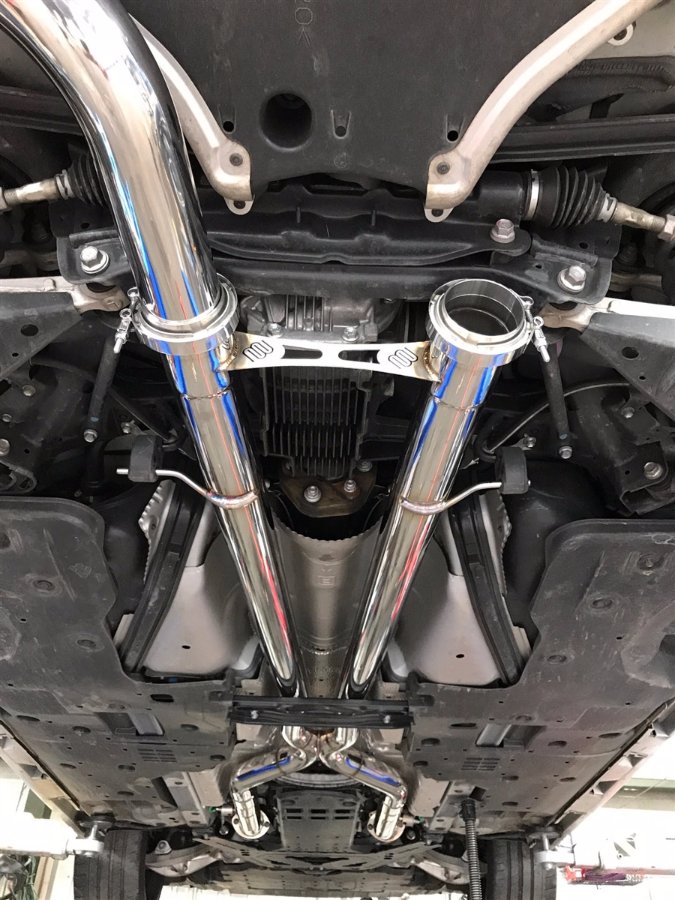 The exhaust gasses from your vehicle’s compressor are directed into your exhaust system through a downpipe. The downpipe attaches directly to the turbine housing. It helps to move exhaust gasses through the system as effectively as possible.

At least one restrictive catalytic converter may be found in the typical downpipe. These are very effective at filtering exhaust gasses as they are created.

Straight pipe exhaust systems work by allowing more oxygen into the combustion chamber while also providing less obstruction for emissions to leave. Emissions from a normal automobile will travel via the catalytic converter and the muffler and resonator. These three components reduce the toxins produced by the emissions and diminish the sound a vehicle produces while in motion.

Straight pipe exhaust systems boost a vehicle’s horsepower and the sound it produces while it moves and when the engine starts by eliminating these components.

Straight pipes are louder than standard exhaust since they lack a resonator or muffler; consequently, you will need to purchase a muffler or sound dampener to decrease noise.

Does it Hurt the Engine?

The engine is not harmed by the downpipe. All it does is make the exhaust gasses less restrictive and flow more freely.

You might even argue that the downpipe is beneficial to the engine since it decreases backpressure and guarantees that the majority of the injected fuel is used during combustion.

However, a straight pipe can boost exhaust gas velocity, which means that gasses emerge from both ends of the tube at very high rates, potentially leading to vehicle control issues such as oversteer and understeer when driving in slippery conditions.

A downpipe exhaust system boosts horsepower and is apparent at all RPMs. It will often provide 10 to 20 horsepower. This gain adds up to a significant boost in performance.

Straight pipe exhausts have the potential to boost both horsepower and torque. Depending on the vehicle, you might expect a 5-10 horsepower increase. At higher RPMs, a power boost should be more obvious.

A Downpipe exhaust is better compared to a straight pipe exhaust, especially if you use your vehicle in residential areas and not for sporting purposes.

A straight pipe engine has numerous drawbacks and should be avoided unless you want a unique-sounding exhaust system or are solely racing cars. Therefore, installing a downpipe exhaust is a preferable alternative.

The two exhaust systems differ significantly in several ways. Straight pipes emit many gasses, but downpipes feature catalytic converters that limit the number of dangerous gasses emitted. Due to emissions, a straight pipe may be illegal, whereas downpipes are legal in most countries. Installing a downpipe is more costly.

You may easily install a downpipe yourself, but the straight pipe requires welding and should be done by a professional. Straight pipes make more noise than downpipes simply because they have no diversions and raise the engine sound more.

Installing a catted downpipe with a tune may give you up to 40 horsepower, and without a tune, you’ll probably get half that, roughly 20 horsepower. This is a significant increase in horsepower with a single performance modification.

A factory downpipe is narrower and more restrictive than an aftermarket downpipe. This implies that sound waves may travel farther, resulting in a louder sound when you accelerate.

A nice catted downpipe doesn’t cost much. Given the amount of horsepower it can provide, this is a rather inexpensive fix.

A catalytic converter is included in a stock downpipe. Toxic gasses in exhaust gas are successfully reduced as a result of this. This is typically mandated by law.

If you bring your car in for a tune-up after installing a downpipe, the CEL should not illuminate. There’s a potential that a catted downpipe won’t light up the CEL if you don’t adjust it.

With the downpipe fitted, you may notice an unpleasant exhaust odour, which is most likely produced by the less restrictive catalytic converter. This scent isn’t very strong and will only be noticeable if you stop for an extended period, such as in heavy traffic.

You will violate your vehicle’s warranty if you make an aftermarket modification. However, this will only affect related elements such as turbo and exhaust systems. Warranties on stuff like air conditioning and gadgets should still be valid.

Aftermarket downpipes are not authorised on public roads. However, traffic cops are unlikely to identify the installation if you have a catted downpipe. However, downpipes are normally exclusively used for tracking and off-roading and are not street legal.

RELATED ARTICLE: Do Mufflers Increase Horsepower: An Expert Weighs In

Straight pipe exhausts have the ability to dramatically increase a vehicle’s overall performance; this is the primary reason why most vehicle owners purchase straight pipe exhaust systems, and they are also popular in racing vehicles for the same reason.

Because there are no obstructions, the engine performance, torque and horsepower are considerably boosted. Most of the time, this will enhance fuel efficiency as well.

Straight pipe exhaust systems offer the vehicle a considerably more dynamic appearance, which may be increased even further with a twin-pipe layout. Many of them also have numerous color patterns and beautiful chrome fish, giving them a much more appealing appearance.

For many drivers, the look of a car is just as essential as its performance. As a result, they applaud anything that improves a vehicle’s appealing visual look.

The straight pipe exhaust is one such crucial component since it is distinctive and will make your automobile stand out in a crowd due to its aesthetically beautiful appearance.

3. Brings out the true sound of the engine

Because of the sound it produces, installing a straight pipe exhaust makes your automobile stand out.

Aside from having the sensation of the engine sound, there is also the added benefit of making it immediately visible when the engine has any troubles due to whatever adjustments are made to its sound.

Another advantage is that there is no need to replace mufflers or other components to minimise noises if the arrangement does not require them.

The straight pipe exhaust system decreases the vehicle’s weight profile. This implies that the automobile will be able to go at a faster speed.

Mufflers and catalytic converters are removed, as is the metal used to construct the exhaust, as just one straight pipe is required. As a result, the vehicle’s weight decreases automatically.

For some drivers, the few pounds saved may not be substantial. Still, any expert driver will tell you that fuel economy is accomplished not just via higher speed but also through lower weight.

A straight pipe exhaust system has fewer parts to maintain because it does not include a catalytic converter, mufflers, or resonator.

This makes driving illegal in many jurisdictions, limiting you to operating the automobile solely on race circuits.

If no earplugs are used, the sound can be quite uncomfortable for individuals inside the car, but some of the noise may be kept out if the windows are closed.

Nothing prevents emissions from being released in a straight pipe exhaust system owing to the lack of a catalytic converter. As a result, greater emissions occur, which are not only illegal but also damaging to the environment.

When a catalytic converter is installed in the system, dangerous gasses created by the burning fuel are transformed to less damaging gasses; otherwise, poisonous fumes are released into the environment.

Furthermore, when your vehicle is subjected to an emission test, it is quite likely that it will fail.

The cost of a straight pipe exhaust system is fairly high. The vehicle’s exhaust system must be completely rebuilt to suit the additional pipes in many circumstances.

Adding a straight pipe to your car will cause the resale value to drop. This is because straight pipe exhaust arrangement is illegal in many countries, and you may have to remove the entire thing to sell the vehicle. Even if you find someone who isn’t bothered by the installation, it’s quite likely that they’ll pay you less money because they’ll have to replace it later.

The system adds excessive fumes, a strong gasoline odor, and a loud noise; therefore, your car’s value is likely to decrease dramatically.

Both the straight pipe exhaust and the downpipe exhaust significantly impact the performance of a vehicle; it increases its horsepower and also increases the sound produced by the vehicle.