Supercharger Oil Change: Why It’s Needed & How Long It Lasts

Installing a supercharger in your car significantly improves its horsepower. However, the supercharger requires oil to ensure that the gears and bearings work smoothly and without friction.

Your supercharger’s oil may last for 20k, 50k, or 100k miles depending on how you use your vehicle. For regular use it may last longer compared to extreme use.

What is a Supercharger?

Superchargers are compressor devices that boost the fuel-air mixture in car engines. This enables them to improve the efficiency of their combustion processes. Combustion requires both fuel and oxygen to function, and increasing the oxygen level in the engine produces more power from the same amount of fuel. 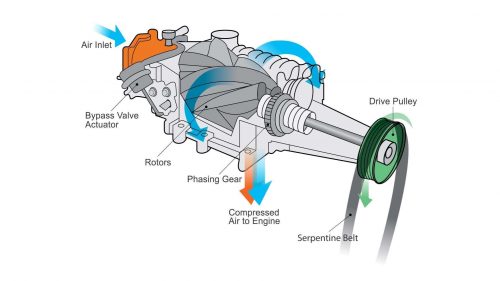 The supercharger system uses a special supercharger oil, which is designed to withstand the rigors of a supercharger. This oil can be injected into the system through the supercharger’s independent oil reservoir. Like your motor oil, it should be checked and refilled as needed.

The supercharger is powered by a belt that runs on a pulley-belt system powered by the engine. This belt needs to be lubricated to keep it running smoothly.

What is Supercharger Oil? 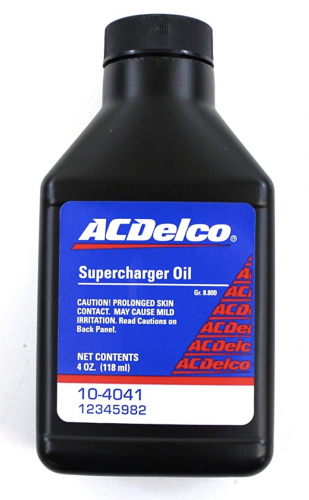 Supercharger oil is synthetic oil but with a lower viscosity. The thinness, odor, and similarity to cooking oil have led many to believe it is organic. However, it is a synthetic oil mixed with other compounds that help it properly lubricate the supercharger under extreme conditions.

For supercharged engines, changing the crankcase oil at regular intervals has proven to be the optimum practice. Use a dependable, high-quality filter and synthetic oil. The supercharger has no effect on the oil quality required for your car.

The recommended oil level ranges from the top (maximum) mark to 3/8” below the bottom mark. Lower the oil to 1/4” below the bottom point on the dipstick for greater boost levels (20-26 psi).The temperature of your supercharger oil is also affected by air temperature. Remember to keep an eye on the Levels.

Check out this ACDelco Supercharger Oil that I always purchase on Amazon. It comes with funnel tops and caps. The different in engine power and smoothness of engine is obvious and you can also hear the difference of the supercharger.

The Importance of Supercharger Oil

The supercharger oil ensures that there is enough air in the internal combustion chamber. This is what allows your car to produce so much horse power. This greater performance is typically the result of increased air pressure caused by the volume of air entering the engine’s combustion chamber.

While superchargers are a very affordable improvement, maintaining and replacing them can be pricey. The most common cause of a supercharger system failure or damage is a lack of supercharger oil. As a result, to avoid the inconvenience of repairs and the spending of your hard-earned money, treat the supercharger’s oil as you would any other sort of regular maintenance.

The Importance of Supercharger Oil

The supercharger oil ensures that there is enough air in the internal combustion chamber. This is what allows your car to produce so much horse power. This greater performance is typically the result of increased air pressure caused by the volume of air entering the engine’s combustion chamber.

While superchargers are a very affordable improvement, maintaining and replacing them can be pricey. The most common cause of a supercharger system failure or damage is a lack of supercharger oil. As a result, to avoid the inconvenience of repairs and the spending of your hard-earned money, treat the supercharger’s oil as you would any other sort of regular maintenance.

Superchargers need oil change because the oil serves as a lubricant for its bearings and gears and generally as a coolant to prevent overheating.

However, overfilling the gear case causes overheating and seal damage, which can be dangerous.

Superchargers have closed oil reservoirs built to survive for a long time. It is not recommended to change the oil unless you detect contamination, leaking, or other issues such as bearing failure.

Changing the supercharger oil will also enhance engine performance dramatically. This will also improve your driving experience due to the various performance that your car will accomplish.

In addition to enhanced performance, changing the supercharger oil ensures that your vehicle’s fuel efficiency improves. This is because sufficient volumes of compressed air will enter the engine’s internal combustion chamber, ensuring maximum fuel burning.

What Happens If You Don’t Change Supercharger Oil?

When you don’t change supercharger oil your supercharger may lose power and efficiency, it’s general performance will drastically reduce.

Because of the erratic air flow through the supercharger, noise will originate from the engine. The supercharger wearing out is also frequently caused by poor oil quality or low volumes of oil, which drastically affects lubrication.

The increased friction caused by the lack of supercharger oil causes the various parts to wear out far faster than normal.

To keep the supercharger from becoming dry, a specialised synthetic oil is required. When it becomes dry, friction increases, creating additional heat and speeding up the drying process. It doesn’t take long for this to turn to sludge, clog your supercharger’s functioning, and destroy it beyond repair.

Does a supercharger burn more oil?

Yes, superchargers burn more oil because they produce more horsepower. However, there are techniques to reduce consumption to an acceptable level, especially on vehicles where the supercharger was added afterward.

Superchargers just require specialized oil. The basic bottle carries 7 ounces, while the supercharger takes about 5 ounces, depending on the kit.

How do I know if my supercharger needs oil?

Examine the color of the gears. If the gears have turned blue-black or black, the system does not have enough oil. The gear teeth may have also worn down due to a lack of lubricant. Examine the supercharger for spilling or leaking oil.

When the supercharger oil is running low or needs changing, you will notice a significant drop in performance and fuel economy. If you discover that you’re stopping at the gas station more frequently than usual after driving the same distance, it might be due to the supercharger. Similarly, if your Mini doesn’t seem to be able to accelerate as quickly as it used to, it might be due to the same reasons.

Grinding noises can indicate a lack of lubrication in many of your vehicle’s moving elements, including the suspension, engine, and, of course, the supercharger system. If you hear grinding noises while driving, you should not procrastinate in inspecting these parts, as a simple supercharger oil fill-up could mean the difference between fantastic driving experiences and a hefty repair bill.

It is advised that the oil in your supercharger be replaced at the very least every 50,000 miles to maintain top performance and protect the system’s longevity. Many mechanics would even encourage you to do it sooner rather than later to be on the safe side.

RELATED ARTICLE: Do Mufflers Increase Horsepower: An Expert Weighs In

How long does supercharger oil last

How long your supercharger’s oil lasts depends on how the vehicle is used, for normal usage it could last up to 12,000 miles or more. However, for extreme usage like racing, towing etc., it will last for shorter periods.

A supercharger’s sealed oil reservoir is intended to last the vehicle’s life. Changing the oil is not required unless there is evidence of contamination, leaking, or other problems such as bearing failure.

How often do I need to change the oil in my supercharger?

You can replace your supercharger’s oil every 50,000 miles, this is a suitable interval for servicing your supercharger. However, always consult your vehicle’s owner manual, which will provide the most up-to-date information on what your car requires and when it requires it.

Is Supercharger Oil and Motor Oil the Same?

Motor oil and supercharger oil are often misunderstood as similar, but this is very wrong. The supercharger system is comparable to the engine system. It includes moving parts that require lubrication and generate significant heat. Its oil levels must be checked and refilled, but that is all that is similar about them.

The supercharger oil requires its own unique oil, and it has its own reservoir distinct from the rest of the engine. Most engine oils are too thick and won’t do the job since they are made for engine parts with slower rotation speeds. In fact, the thickness of supercharger oil is comparable to that of cooking grease. That’s how thin it is. As you would be well aware, most engine oils are a lot thicker than that.

Depending on the kind, a supercharger only requires 4oz to 6oz of oil. Earlier generations generally worked with 6oz, while current generations can get by with roughly 4oz.

Do check out my favourite brand of engine oil, Valvoline Advanced Full Synthetic SAE 5W-30 Motor Oil on Amazon. The quality is top-notch, and I always get it upfront, and only pay for the labor at the service centre.

How do you Change the Oil in a Supercharger?

You can try, but it is not the same as a routine oil change. Changing the oil in the supercharger requires removing it, emptying it, examining various plugs, and refilling it before reattaching it to the engine. Additional time, room, and equipment are required to achieve this properly.

The supercharger oil is replaced as part of the periodic maintenance on superchargers. If you are attempting to refill with the vehicle’s supercharger, simply keep filling until fluid begins to stream out of the fill hole.

The supercharger can be removed in a few hours, but it’s not a pleasant experience. It’s really simple; however, the oil has a foul odor; be prepared to smell it as soon as you undo the bolt.

Remember to perform this while the engine is cool; if it is hot or still warm, the oil will pour out when you release the bolt. Also, make sure the automobile is on a flat surface.

Lack of attention to your supercharger’s oil can result in you losing the supercharger entirely or needing to spend much money to repair it.

While replacing supercharger oil at home is possible, it may be a time-consuming and challenging task. It may be stressful, and if done poorly, it can cause more harm than benefit. It is advisable to have expert technicians skilled in auto maintenance evaluate your vehicle to guarantee that it receives the needed maintenance.