Personally, I have run my car with multiple sets of headers. For most of them I notice a minor improvement in fuel consumption.

The best was My Camaro where it went from 18mpg using stock manifolds to 20 mpg using an aftermarket exhaust header. Not significant but it’s an improvement.

Even more so when we consider that headers are designed for power and not for fuel economy!

In this article, I will dive deeper into exhaust headers and gas mileage. Specifically some topics below:

Excited? Well, I hope you are.

It is proven that exhaust headers which are tuned for economy, can improve the gas mileage by a small margin. And this is around 2-3 mpg improvement on the highway or city.

This isn’t significant compared to the performance they deliver. Therefore it doesn’t fit the category for people that aim to get more fuel efficiency out of their cars. 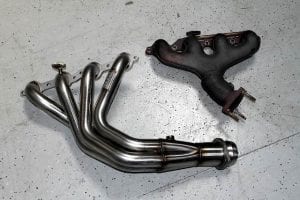 The car enthusiasts are running these aftermarket headers for pure performance. With proper tuning, these performance headers can improve the horsepower rating by 20-30 horses, and that is definitely a huge boost.

20 hp increases may sound a little, but when you are behind the wheel (Oh yeah!) you will instantly experience the improvement in power.

The lesson? Exhaust headers do increase gas mileage by a little. But don’t buy headers for the mileage. Instead, get them for the power.

Some people experience a drop in gas mileage after installing headers because they are unnecessarily revving the engine more.

Mostly because they are excited over the new power and sound from headers.

Exhaust headers do make sound better. If you are here, you know this well.

When a car sounds good, most drivers usually will put on throttle for a longer duration to experience more of the “music” their car is making. (Haha! I’ve been there)

This practice may also reduce the gas mileage of your car. Since you are revving high the engine draws more fuel and there comes the reduction of the mileage.

I am not saying you should avoid this. But know that excessive revving could significantly reduce gas mileage.

Do you need tuning to improve MPG with headers?

You definitely need to tune your car after installing exhaust headers. This is required to fix the air/fuel ratio – which will give you the boost in performance and improvement in gas mileage.

Aftermarket headers are not meant to work with your engine from the factory. You need a tune to make sure your engine injects more fuel and get the air/fuel ratio right again.

Remember, exhaust headers provide more oxygen in the combustion chamber. You also need to tune your car to inject more fuel. Without tuning, your car will run lean and overheat.

I have an article here discussing more about tuning for exhaust headers. Do I Need A Tune After Installing Exhaust Headers?

Short tube headers are much better for improving gas mileage because they are designed to work on the low to mid RPM range. This is the RPM range where you will be driving most.

Go for long tube headers if you want performance. They are designed to work well on high RPM ranges.

This is the RPM range you need to worry about for performance and racing in general. 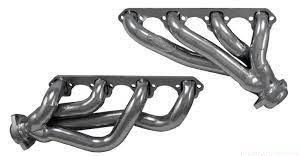 Headers will boost the torque on high rpm and also boost your horsepower count by 15-30 hp at ease, especially if they are long tube headers that work the best for performance applications.

If your only aim is to improve your gas mileage, do not go for aftermarket headers. Yes, it will deliver more mileage, few mpg improve with a proper tune, but not a lot.

Exhaust headers are one of the coolest mods out there and for sure are one of the best ways of making a ton of power, while also improving a little of your vehicle’s fuel economy.

Especially if you run a big beefy V8 under the hood. Even better if it’s a stroker engine, strokers are meant to run these mods and deliver the best performance with these headers.

These stroker engines make a lot of power and deliver a lot of torque as well.

Install aftermarket headers only if you aim for performance on the road and as well as on the track.

Because that’s the reason why these headers are designed, making car enthusiasts happy by delivering a ton of power. And also, plenty of sound.

If you only want better fuel economy, there are cheaper ways if you want to get better gas mileage.

Get Your Motor Roaring: Louder Car Without Breaking the Law!

Exhaust Bandages 101: How Long It Lasts & Will It Pass MOT?

7 Symptoms of Bad Headers: Impact To Engine, Sound, and Cost

Expert Take On Flex Pipe For Car Exhaust: Are They Good?

Exhaust Pipe Replacement: Can You Use EMT Conduit?

5 Steps To Clean Oil Off Your Exhaust Pipe: Will It Burn Off?